I cannot vote in the 19th district. Castleton was gerrymandered out of the former district some years ago, and then a few years ago New York lost a House seat, and a couple of districts were carved up as a result. Still Castleton was not put with our neighbors, but instead is an add-on to the district across the river. However, I do own a house in the 19th district, my family lives there, and I grew up there, so I am very protective of the district. The current race is really getting on my nerves. I want a huge Gibson sign to plant in the hayfield in Samsonville.

The Freeman did an interview with this kid last Tuesday that really frosted me. I saved this twitter transcript for a week, intending to post it, but no time until today. Since I am in a bad mood at present, this is a salve. (Sort of.) The Freeman reporter’s tweets are in italics, followed by my responses.

1. Eldridge said when looking at this Congress he's frustrated. It's a wake up call. Wants to be part of the solution to make it work.

Because being a 30 year old with the sole qualification “married money” is such exemplary preparation for Congress.

2. Eldridge said he respects Congressman Gibson, but they have some fundamental differences.

Such as life experience and understanding the district.

3. Eldridge said he opposes fracking, while Gibson supports it.

The only thing this tells me is that you support a change to Federal control while Gibson believes it should be a State issue. What difference does your opinion make otherwise?

4. On women's health, Eldridge said he served on Planned Parenthood board.

5. At end of day, influence of large corporations in Washington have dominated conversation and we need more independence, Eldridge said

WTF? You would be one of the, if not the, wealthiest members of the House if you are elected.

6. Eldridge said chose to come to Hudson Valley because loves the area.

Especially viewing it from the top of a mountain in a two million dollar house.

7. Said he didn't move here just to run for Congress.

“Just” being the operative word.

8. Been an active member of the community and proud of work he's done, Eldridge said.

Really? Have you served on the Gardner town board or something? Who knew.

9. The Hudson Valley is our home and we're very committed to the small businesses we're working with, Eldridge said.

Hey mister! Let’s get something straight. The Hudson Valley is MY home. You couldn’t find it on a map two years ago, and you probably still don’t know whether Shokan is Dutch, Algonquian, British, or None of These. (And forget about pronouncing the names of the warriors of legend who have been defiled by your ritzy development.)

10. My husband and I have been fortunate, but that's a recent development. We didn't grow up wealthy, Eldridge said.

This response really demonstrates how out-of-touch you are with ordinary people. You are the child of doctors.

How old was the doctors’ son then...21? On what planet is this not growing up wealthy?

Hun? You had a teenage (I hope, because this really would be pathetic if you were older) job in a fast food joint. That this is even mentioned among your qualifications makes me wonder about how truly thin your resume is.

13. He said he believes in public service.

All right then. Route 28 really could use young, healthy volunteers to pick up trash along the highway.  Why not sign up? (Be sure to bring your tick spray.)

14. Because we've been blessed, we know we didn't make it on our own, Eldridge said. Want to make sure other people have that shot.

Is it possible for you to make all parents doctors and all spouses facebook millionaires? Did not know that. You are even more powerful than I thought.

15. We're not accepting any corporation of business political action committee money, Eldridge said. Wants to be an independence voice.

The benefit of being rich enough to buy a seat.

16. Fortunate that have money to be an independent voice in Washington, but want everyone to have same chance, Eldridge said.

17. Yes, we have a diverse set of investments, but will fight for those companies to do what's right for environment and pay fair share, he said

Boy do I wonder exactly what horror is in that portfolio.

18. Seen veterans group speak out about SAFE Act. Is a gun owner himself. Believe can be balance, Eldridge said.

My BS-o-meter goes off with that one. (Not to mention, this dude has a gun? Why? Maybe to protect his property from the 99%, the peons down below in the valley?)

19. Would support many parts of the Farm Bill. But can do those things, while preserving free lunch programs, Eldridge said. Do both

Translation: Does not support farm bill.

20. Had a lot of national interest in the race, but have been focused on the publications/media in the district, Eldridge said.

Posted by howzerdo at 12:13 PM No comments: Links to this post

Good response to the shelter dog opinion piece I addressed here.
Posted by howzerdo at 6:07 PM No comments: Links to this post

1) Have long, scraggly beards become in? Bob googled and discovered that "Duck Dynasty" made beards popular again. That can't be it, can it? These men I'm seeing seem to be copying Amish beards..
2) The Troy Record had a photo essay about the Price Chopper grand opening -- where St. Patrick's church in Watervliet was torn down. ARE YOU KIDDING ME? Do I have to boycott the Record too? (PC is already dead to me.)
3) It's that time of year again, Saratoga racing season. When people act as if cruelty is cool and gambling is high class. Spare me.
Posted by howzerdo at 1:21 AM No comments: Links to this post

Recently I did something I vowed never to do again. I purchased a print book! I was reading Lost Towns of the Hudson Valley and one chapter is about Roseton, where several large brick manufacturers were located.

We've been putting up a new Beagle- and critter-proof fence in Castleton, and our hard is pure Hudson River clay, perfect for brick-making. I've been working in the garden, and I have a bunch of bricks holding down the bottom of the deer fence. Some of the bricks were toted all the way from Brewster when we moved to the Capital District in 1985, and others were here, undoubtedly made at the long-defunct Brickyard.

The chapter piqued my interest, and I examined some of my bricks more closely. One has "JMC" on it. From the lost towns book, I figured that meant Jova Manufacturing Company, and I was able to confirm that at this website. I wanted to know ,ore about the Brickyard in Castleton and the brick industry in general, and discovered this book is one of the best sources.

It is out-of-print so an ebook is not an option.So I bought a copy on amazon from a seller offering used copies. Many were the same price, so I chose the most highly-rated vendor with the best condition copy. I paid no attention otherwise. Shortly afterwards, I received an email from this local bookstore.

Turns out they were the seller! The owner dropped the book off at my house and gave me a gift certificate for the shipping.
Posted by howzerdo at 1:56 PM No comments: Links to this post

Some of this story is confusing and contradictory. She bought a dog from a breeder, but color was not desirable so it can't be a show dog? How does that differ from the reason some dogs wind up in shelters? She's obsessive about lineage, but this dog has an undesirable trait (so I assume wouldn't be bred)? She adopted Mookie from a shelter, had him for more than a decade -- a good, long time -- when he developed health issues. Somehow that reflects negatively on the temperament and health status of shelter dogs? Yes, she had two dogs who became ill and died too young (although I would be kissing the ground and singing praise if I was given the gift of three more years with my dog who had cancer). But how is any of this a reason to avoid shelter pets? She seems to need to blame someone for her pets' illnesses and deaths, does not seem able to accept that there are painful times in life. There is no guarantee that her re-homed dog will stay issue-free until age 15 and then will slowly decline in an easy to manage, vet-trip free old age. Maybe she should re-evaluate whether she can commit to having a dog. I have adopted several dogs from shelters over the years and all have been wonderful. I currently have two former shelter dogs, both Beagles. I adopted one as a senior. This woman's problem is one of perspective. She's very negative.
Posted by howzerdo at 10:07 PM No comments: Links to this post

Email ThisBlogThis!Share to TwitterShare to FacebookShare to Pinterest
Labels: animal rights, my animals

We watched the movie "Snowpiercer" last night. It wasn't my kind of movie, and I probably would not have wanted to see it, except that a friend recommended it, saying she isn't a fan of post-apocalyptic stories, but thought it was excellent. The notable thing about it was that it was released as VOD at the same time as it is in theatres. I am happy not to have wasted the time at a theatre. It was too loud even for home viewing, and it was way too violent for my liking. It did hold my attention (mostly) but the story was too much a rip-off of other, better movies. Even Bob was not impressed, and post-apocalyptic is one of his favorite genres.
Posted by howzerdo at 11:57 AM No comments: Links to this post

Email ThisBlogThis!Share to TwitterShare to FacebookShare to Pinterest
Labels: movies

I don't believe my vegetables are growing as well as I'd like. They are growing, and setting fruit, but seem too spindly and yellow. A problem I can't do anything about is that it's too shady for most veggies, but I can certainly change the soil nitrogen level and acidity. Stay tuned!

We saw 42nd Street at the Mac-Haydn Theatre on Thursday. It was great!
Posted by howzerdo at 5:07 PM No comments: Links to this post 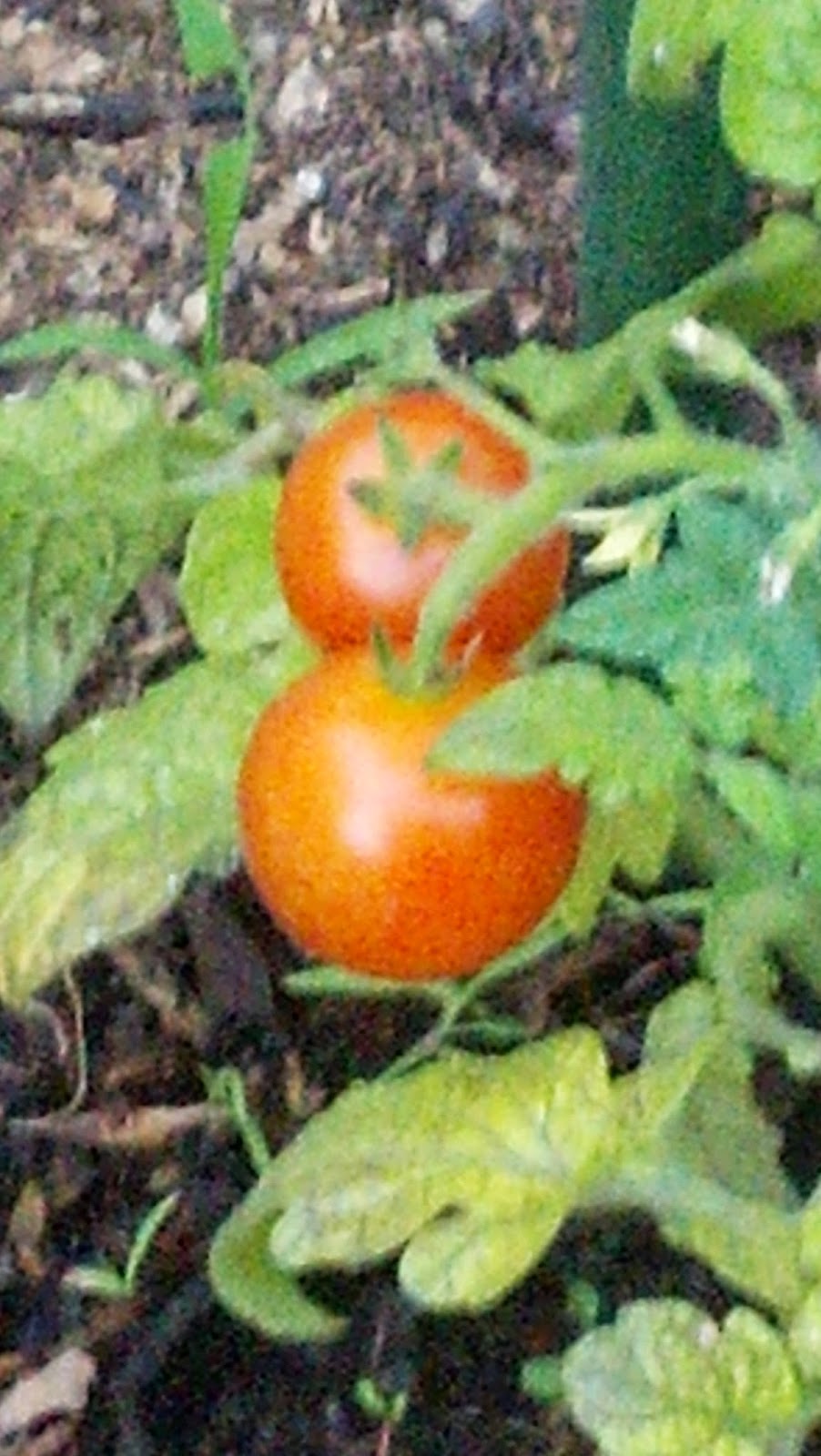 Picked the first tomatoes yesterday! "Only" cherries, but still. 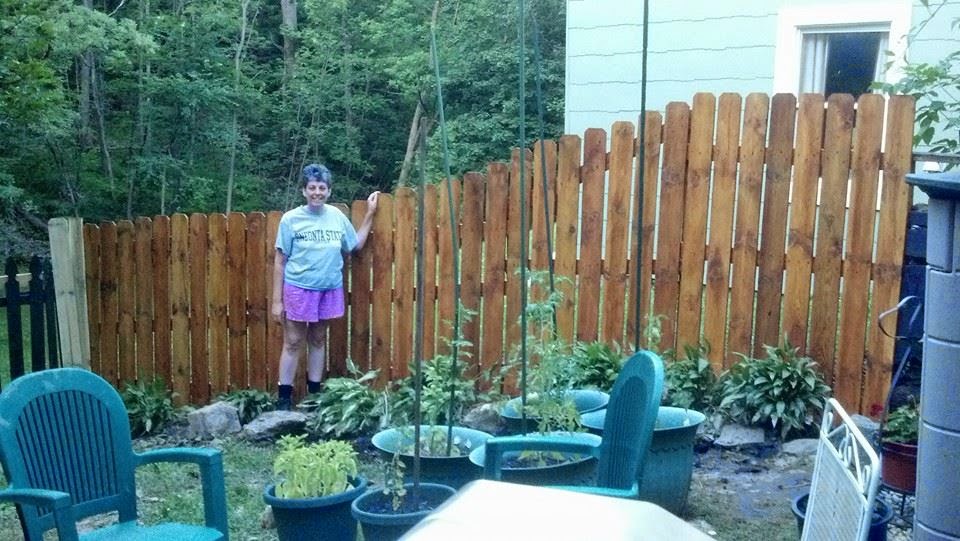 How we spent Independence Day weekend 2014. Beagle and critter proof fence 1/3 done.
Posted by howzerdo at 12:41 PM No comments: Links to this post

Email ThisBlogThis!Share to TwitterShare to FacebookShare to Pinterest
Labels: Castleton, gardening, my animals

Wise words from over thirty years ago: “Don’t expect anything and you’ll never be disappointed.”

Posted by howzerdo at 7:16 PM No comments: Links to this post