I reviewed the rosters for my spring semester classes and one of them has more students with unpronounceable first names than I've ever had in a class of 25. As someone with a name that is routinely misspelled and / or mispronounced, I completely "get" the need to be sensitive. It's common to have some students with unique or unfamiliar names in class, but this list isn't mostly international students, or simply parents choosing clever phonetic spelling or culturally inspired monikers. Something must have been going on twenty years ago. Maybe it was the impact of the millennium or hanging chads or 9/11. Really hoping several save me when I am stumbling over Jxldyrr and Zjnlee by suggesting I call them Jo and Zee.
Posted by howzerdo at 2:13 PM No comments: Links to this post

Email ThisBlogThis!Share to TwitterShare to FacebookShare to Pinterest
Labels: teaching

Happy New Year! Didn't want to let January slide by without making a post. I've had several thoughts about things to write since my last post, but then never actually logged on and composed. The one that comes to mind right now: we watched two movies within the past few weeks. First, was Eat, Pray, Love. I can't believe we'd never seen it before. It is new to Netflix (I think) and it caught my attention in an email. It was entertaining (I guess) but also annoying. Why do we celebrate shallow things and act as if they are actually deep? The second is a fairly new movie, The Mule. Also entertaining, but seriously? Clint Eastwood is the star and yay to him still working, but why - even when a senior actress is cast in the role of his ex-wife - is there still a ridiculous gap in age - and she is the sickly, dying character?

Bob turned 60 a couple weeks ago. We always go to the movies for his birthday, because he likes going to a movie theatre. In the age of streaming I could skip it. Anyway, we couldn't make going to the theatre work for various reasons, so bought the Eastwood movie streaming on Amazon instead. I promised a rain check!
Posted by howzerdo at 1:51 PM No comments: Links to this post 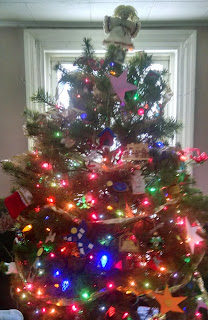 I'm not sure why it looks crooked. Doesn't appear that way IRL.
Here's a beautiful story, beautifully written.
Posted by howzerdo at 1:33 PM No comments: Links to this post

Here's a beautiful piece of writing. And, I couldn't agree more. Unfortunately I don't think anyone is interested in toleration. That reminds me, I haven't taught it in a year, and probably will not be teaching that class again. I have not been annoyed by this change because it hadn't been fun to teach for a while. But I will be teaching ethics; that's a good thing.
Posted by howzerdo at 1:06 PM 1 comment: Links to this post

Two steps forward, one step back. If animal abusers are permitted to walk free, get their animals back, or the shelters have to bear the cost...no words I can write here. I am so mad!
Posted by howzerdo at 11:43 AM 1 comment: Links to this post

Now my university account is requiring a two-step log in. Seriously, the hacking situation must be at crisis level or something. The process wanted my cell number, and I thought, no way, even though that was the recommended choice. My cell is often not charged, and frequently is downstairs, far from my computer.
Posted by howzerdo at 3:44 PM No comments: Links to this post

The past couple months, I have no luck logging into accounts I've paid electronically for years, I am forced to submit a forgotten password request, create a new password, verify the account, answer the security question - every time I log on. I don't even bother with trying to remember any more, because no matter whether ScReWuIhAtEdOiNgThIs7$ is correct, it never works. What is going on? Is hacking really this rampant? It's making mailing in paper checks seem efficient.
Posted by howzerdo at 6:15 PM No comments: Links to this post