I almost forgot! Ande is FIV and FeLV negative!! So the pillow pad is something else, probably not that serious. What a relief! All the other bloodwork came back too - all good for Sam and Sophie. Edna has some kidney and heart issues (which I knew about already), but that is to be expected at her age, and even at that, nothing is really, really severe yet.
Posted by howzerdo at 2:09 PM No comments: Links to this post

Email ThisBlogThis!Share to TwitterShare to FacebookShare to Pinterest
Labels: Ande, Edna, my animals
My classes are going really well, and the toleration class may be the best I've had. However, today I want to write about a pet peeve. My biggest problem in recent semesters is text messaging. It is kind of trivial, but it creates enough of a disruption when it gets out of hand to seem more significant than that.

I announce the first day what the ground rules are, and I put them in the syllabus. But still I see students in almost every class texting. At the second class, one student didn't stop when I told him not to do it, and then he abruptly left when I called him on it again. It was before the add / drop deadline, and I was sure he would drop - but he didn't. Yesterday, another student (in a different class) in the front row thought she was being clever by hiding her PDA under the flap of her pocket book during my opening remarks...head down, texting away, oblivious. If I don't nip the behavior in the bud, it gets so out of control that these addicted students do it constantly, and more and more students join them. Then the ones who aren't doing it get angrier and angrier, and I lose control of the room.

My issue with it isn't really that it is rude (although it is). It isn't even that they aren't paying attention to me (that isn't quite true, it does annoy me when they don't listen and then ask me 1,000 questions later about something I have explained 10 times in class, or - even worse - when they finally hear the answer, proceed to complain about being held to some rule or deadline that has been stated many times, insisting I never said it in class or wasn't clear when I did say it). My biggest issue is that these students are not engaged with other students, or the class, ever. They don't learn, much less contribute anything - because they aren't paying attention, and they don't know what anyone is talking about, so how can they contribute? So they sit there in their own world, connected electronically to people elsewhere, exchanging OMGs and LOLs while surrounded by real people that they don't exchange a word with. It's sad to the point of being creepy.

I know electronic communication is addictive. And it seems that people have a different definition of what constitutes an "emergency" in terms of taking cell phone calls these days. They must always be available. Nothing can wait, even fifteen minutes. Hey, I love my Blackberry too, but how would they like it if I whipped it out while they were speaking and started texting...then looked up after a while and said, "huh?"

The downside of enforcing this rule (aside from my not liking to have to pull rank and call students out) is that the classroom becomes a revolving door - students can't wait to chat but they don't want to risk my wrath, so they leave the room whenever the need arises. And it really isn't possible to force students to stay in their seats - I mean this isn't elementary or high school with hall monitors and passes for the bathroom. I do ask them not to make the classroom a revolving door - again, on the syllabus and on the first day of class, but that is even harder to enforce than a cell and texting ban.
Posted by howzerdo at 1:40 PM No comments: Links to this post

Email ThisBlogThis!Share to TwitterShare to FacebookShare to Pinterest
Labels: teaching

We took the dogs and cats to the vet yesterday. It was basically a well visit, as none are obviously sick. Edna cost the most and took more time, she she is very old (16+). Sam was the fastest and least expensive, since he is young (3) and robust, to say the least. Sophie and Ande were somewhere in between. Sophie is pretty old for a Bassett Hound (10), but there is nothing major wrong with her. (She has severe allergies, but that is nothing new.) Ande is young (1.5 years). Unfortunately, one of the really cute things about him (he is tiny) probably means he is also frail. He doesn't seem ill, but the vet noticed he has plasma cell pododermatitis (pillow foot). Some studies have linked it to FIV, so she tested him for that and FeLV. His results were negative when we first adopted him, but given that he is tiny, hardly eats, gets dirty ears, has this condition on his front pads, and came from a cat colony - who knows. FIV isn't easily transmittable to Edna, but FeLV might be. Then, he is likely to have a decreased lifespan if he has one or both. It sounds to me as if FeLV is the more serious disease, in terms of both ease of transmission and outcome. So I am keeping my fingers crossed that he tests negative again, but I confess that I am a little worried. Poor "Little!" Not sure what I will do about his contact with Edna if he has FeLV. Luckily, they don't fight at all, and really don't share their dishes or groom each other. But they do share a litterbox, and it won't be easy to keep them separate.
Posted by howzerdo at 3:57 PM No comments: Links to this post

Email ThisBlogThis!Share to TwitterShare to FacebookShare to Pinterest
Labels: Ande, Edna, my animals

I have decided to start sprouting! It's healthy, but not only that: it will help me (somewhat) satiate my gardening "itch" in the winter. I ordered SproutMaster mini trays as well as six varieties of seeds: alfalfa, salad mix (a blend of alfalfa, radish, clover, canola), broccoli, rainbow bean (garbanzo, lentil, pea), garlic, and one other blend (kale, broccoli, red cabbage, yellow mustard). I can't wait to get started; first, I have to soak the seeds overnight.
Posted by howzerdo at 2:46 PM 2 comments: Links to this post

Email ThisBlogThis!Share to TwitterShare to FacebookShare to Pinterest
Labels: gardening

We went to the Hollywood Brown Derby, a new restaurant in Albany, on Valentine's Day. It was pricey...and wonderful. 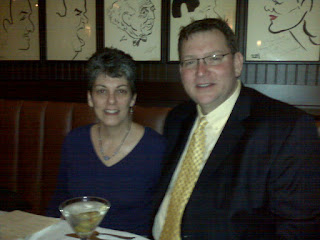 Posted by howzerdo at 1:44 PM No comments: Links to this post

Winter break! It is only three weeks into the semester, so it is kind of soon; I don't have a lot of evaluation work to do yet. This may be a good thing, in terms of being able to accomplish a few things I want to do that are not teaching related. Or maybe I'll just rest! Remains to be seen.
Posted by howzerdo at 9:56 AM No comments: Links to this post

Last night, we went to opening night of the play No Child at Capital Repertory in Albany. It was great! It was provacative, which I expected, but it was also quite funny at times, which I was not expecting. And, since it was opening night, there was fabulous food before the show, as well as champagne and a very tempting table of pastries afterwards. (I had a cannoli.)

On Monday, I went to the oral surgeon. Much better experience than the first place! My extraction is scheduled for 3/9.
Posted by howzerdo at 3:34 PM No comments: Links to this post

I am sick again! Not as bad a cold at the one I had on Christmas, but ugh. And although it isn't as severe, it is more the lingering type. Must have picked it up on campus, the students are coughing their heads off.

Before the holiday cold, I hadn't been sick with a head cold since 2005, when Rudy died. But Lyme disease + all those antibiotics + another shot of antibiotics because of my tooth problems = no immunity, I think.

Managed to survive my campus duties though, didn't stay home and cancel classes. Very cold here again, then it is supposed to get warm for the weekend. The extremes can't be good, either.

I can't type on this laptop keyboard at all. How do people text?
Posted by howzerdo at 11:26 PM 1 comment: Links to this post

The most important news of the day. Groundhog says six more weeks of winter! But I think we all already knew that, because the wooly bears were mostly black and the fall harvest was abundant...and the snowfall total is already above average.

Today is Sophie's made-up birthday. We don't know the actual date, but it is around now, and I thought February 2 would be a fine date. She is 10 years old. So Happy birthday to Weg! (That's just one of her many nicknames.)
Posted by howzerdo at 2:01 PM No comments: Links to this post