This was my Facebook post just now: Today there was a post in my Facebook feed that reminded me: June 6 is Animal Advocacy Day in NYS. (In 2021 there will be no in-person event, due to COVID-19.) The post was a reminder only because it made clear to me, once again, that a convicted abuser is celebrated by misguided people, and so cruelty is condoned and normalized.

It's cryptic, but here I don't have to be. The post was from my local library, about a local organization I support financially. They are partnering on a walk that starts at a building owned by a man who serv ed jail time for starving and freezing to death a dog -- he chained it to a tree. This scum landed in my community and is more than tolerated. Makes me want to puke.

Posted by howzerdo at 5:11 PM No comments:

I am really happy our numbers in New York are better. I'm sure the vaccine has something to do with it, but I think the season is more influential. We're outside more. When the Fall hits and we return inside, with no masks and less distancing, what will happen? I doubt lots more people will get vaccinated. In fact, if I was a young person, I probably wouldn't take the risk of a vaccine only approved under emergency authorization.

We went out for our anniversary on Monday. We sat outside. I wasn't expecting it to be busy, but it was insane. There was only one waitress on, and service was terrible. The food was okay, but I felt a little under the weather afterwards from drinking two glasses of wine combined with a greasy appetizer. Pre-pandemic, that much drinking was nothing, but now I rarely have alcohol. We used to love eating out; a little sad to see it be a casualty of COVID, but I think it might be. (That doesn't translate to cooking, though. Take-Out rules.)

Finished grades!!! YAY. A "friend" on FB put up a picture of his cut up mask with a comment about freedom. That ain't freedom, dude. And it got him an un-follow from me. LOL. I haven't had a cold in over a year -- largely due, I'm sure, to staying away from other people, excessive hand washing, and mask wearing. I hope shaking hands never comes back; I hope people stay home when they are sick.

I was scheduled to get my first vaccine on March 31, but that was the day after Rosie died and I was at the pet crematory. (I cry as I write that.) I rescheduled for April 21 and was relieved because classes would be over the day before the second shot, in the event of a reaction. On May 12, I got the second dose of the Pfizer vaccine, and on May 13, I was one of the unlucky who had severe side effects. I think I didn't understand until it happened to me. It wasn't like the flu at all, "it flattened me," which is how someone described it in a Google search I did. My arm was sore Wednesday night, much more than it was after the first shot, so I should have suspected. If I had known, I would have skipped the second dose. I was pretty vaccine hesitant, but got it due the social pressure. Not that anyone said anything to me, but in my community, getting the shot is the norm. At minimum I should not have scheduled it until after grades are done, because the deadline is tomorrow, and I am stretched to the limit. The mask mandate is being loosened -- but like in this New York Times story, I think I'll keep mine handy.

I have learned that another grant I wrote was funded! $21,250 for a tree inventory. I am a skilled grant writer, and I need to find a way to transition from how I make my bread now (as Mark Twain would say) to grant writing. To that end, on Friday I am going to a web conference for a Regenerate New York forestry grant.

Posted by howzerdo at 3:19 PM No comments:

I thought this year would be a banner year for posting here -- maybe not compared to those years when I wrote 200 or 300 times, but way more than in recent years. Now I'm not sure. I just don't feel like writing journal entries since Rosie died. Plus my schedule hardly allows the time. :-(

Semester nearly over (May 11) and then it will be grading hell.

Posted by howzerdo at 4:58 PM No comments:

I'm pissed that Dr. Fauci (according to commentary that slipped into my awareness despite my embargo on all news) is acting like there is a good chance J&J will be fired up again, no problem, move along, nothing to see here. Why do public health people have no clue how to overcome vaccine hesitancy?

I had two extremely bonded dogs, Howie (1980-1995) & Penny (1983-1999). After Howie died, Penny was never quite the same. She had happy times certainly, but mostly she did not get over it. We adopted Rudy (1995-2005) as a puppy, and although he was a salve to me and they got along fine, especially after he grew up (he tortured Edna the cat worse when he was a wild puppy), it didn't snap her out of mourning. When she died, I found comfort in thinking that she and Howie were reunited.

Harry isn't having an easy time handling the loss of Rosie. I knew they were close, and that he followed her lead, but I didn't expect this much impact. I knew she was alpha, but I didn't realize how much that mattered to Harry and made him feel safe. I want to get another little Beagle (I miss Rosie so much...), which is hard right now to accomplish. I haven't adopted another cat, and Teddy died in February 2020; very odd for me. I know I have to be careful in choosing an appropriate companion for Harry, after the Penny experience.

Email ThisBlogThis!Share to TwitterShare to FacebookShare to Pinterest
Labels: COVID-19, my animals, Rosie

Tuesday evening our little circus dog Rosie rocketed up through the heavens, taking with her the broken hearts of two humans and her canine companion. Rosie was about 17 years old, adopted as a "senior" in 2012. I'm not sure what she was doing for the first eight years of her life, how she became a stray, landed at a shelter or why no one claimed her, but their loss was our gain. For the past nine years she brought so much joy. How could a 25 pound, 13-inch Beagle leave such a spectacular hole in the ozone?

I suspected on her last "Gotcha Day" (February 27) that we very likely would not have her for Gotcha Day #10 in 2022. She was not sick until very recently, but she slowly, gracefully declined over the years, and in 2021, it was more noticeable. Bob carried her down and upstairs (she would still try to do it though, and sometimes would get impatient and beat him to it -- most recently, two weeks ago). She became increasingly finicky, although she still ate and had a good appetite almost until the end.

We went back to Sienna Sky and had her cremated yesterday. Hard, but less so than burial.  Now I am so anxious, can't sleep or eat much. She was always with me as I worked on my computer, in this third floor office. Her empty basket is behind me as I type this.

Harry is so sad. She was alpha.

The pandemic and various personal issues have prevented getting another cat since Teddy died last year, though we have done some light looking; I know we will get another dog (Harry can't be alone) but not sure when.

She was so cute and precious, good-natured, calm, quiet, independent, smart. A couple years after we had her, she revealed that she knew tricks - sit-up, both left and right paws and she entertained every morning with a full routine. She loved the outdoors, much more than Harry does. 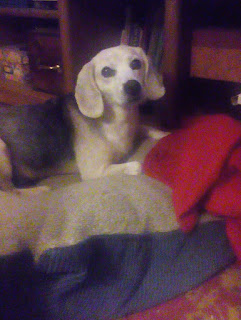